This tutorial is the second part of a series on professional R deployment. Please find the previous part here (How to make a dockerized plumber API secure with SSL and Basic Authentication).

If you followed the first part in this tutorial series, you have achieved the following things:

For a single container deployment the approach we have seen is absolutely feasible, but once you repeat this process you will notice the redundancy. Why should we install and configure NGINX for every single container instance we are running in our environment? The logical thing to do is to configure this common task of authentication and encryption only once for all deployed containers. This can be achieved by utilizing docker swarm (https://docs.docker.com/engine/swarm/).

Docker swarm is able to run a collection of containers simultaneously such that they can communicate with each other over a shared virtual network. Docker swarm has a multitude of features which makes it a powerful tool even in large scale deployment, but in this tutorial we will apply a minimal setup to provide secured access for two or more containers running plumber APIs. To achieve this we will make use of the AHUB deployment framework (AHUB on Github). AHUB provides a pre-configured swarm setup to deploy analytical containers (based on R or any other language) with minimal effort.

The setup we want to achieve is the following:

First you need to clone the content of the AHUB repository on Github to your local machine (AHUB on GitHub) and open a Bash or Powershell session in the cloned folder.

AHUB comes with a pre-generated certificate and password file. But of course you want to change these. This is very quickly done, with two little helper containers. All you need to do is navigate to the subfolder ./configs and run the following commands (please fill in your username and password). This will create a new SSL certificate and key along with a .htpasswd file containing the MD5 hashed credentials for your user in the subfolder ./configs.

Docker swarm operates with a recipe, telling it which containers to spin up, which ports to publish, which volumes to mount, et cetera. Everything you would normally  configure in a single „docker run …“ statement for a singular container instance, we instead write down in the so called Compose file when working with docker swarm. For a more detailed introduction see here.

Please inspect the demo file in the main folder

The first block defines the node stack. Here you can add as many container images as you like. For compatibility with AHUB it is only required that plumber (or any other API) publishes on port 8000 and provides the Swagger definition file (if you want to use the GUI functionality). The latter is achieved by running the plumber $run command with parameter swagger=TRUE.

IMPORTANT: If you want to add your own images, you need to make sure, that they are hosted in a container-registry, otherwise docker swarm will not be able to find them. Either you use the public Docker Hub or set up a private registry with one of the cloud providers (Google, Azure or AWS).

The analytical nodes do not have to be R based. A python node running a combination of flask/flasgger would be compatible as well.

The second block constitutes the service stack and does not need to be changed, if you stick to the basic scenario with self-signed certificates and basic authentication. Changes here need to be made if you want to use more elaborate functionality like auto-refreshing Let‘s Encrypt certificates or Active Directory Authentication. These use-cases will be covered in future tutorials.

For now you can either leave the demo file as is or add/substitute your own container images in the node stack! Note: There is no need to configure nginx when adding containers in the node stack. This is all taken care of by AHUB.

Ramping up the swarm

Before we launch AHUB we need to prepare the docker daemon to run in swarm mode:

This command references the Compose file ahub.yaml to deploy a stack called „mystack“. Of course you can change the name of your stack to your liking.

You should see the following output on the shell:

Here is a quick intro on the components of the service stack (the code and Dockerfiles for them are located in the subfolder ./modules):

Portainer is a very powerful browser-based container management tool. We can start checking if everything ramped up fine, by navigating to http://localhost::9000 (Portainer listens on this port). As you are starting this cluster for the first time, you need to set an admin account and then choose the “Local“ mode. After that you get to the Portainer main page, where you can click through the items Services, Containers and what else piques your interest. With Portainer you can do almost anything you can do from the docker command line interface.

Under the Services tab you should see 9 services if you stuck to the demo file. Three of them being the nodestack comprising of node1, node2 and node3. Everything is fine when you see a 1/1 behind each service. 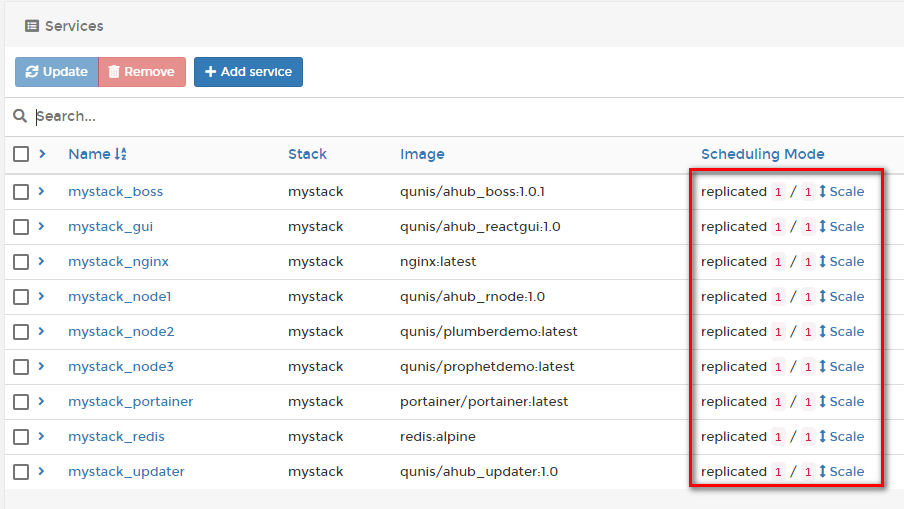 There is also a rudimentary GUI at https://localhost (still under development) showing you the various nodes and their endpoints so you can manually trigger a GET request for testing purposes. 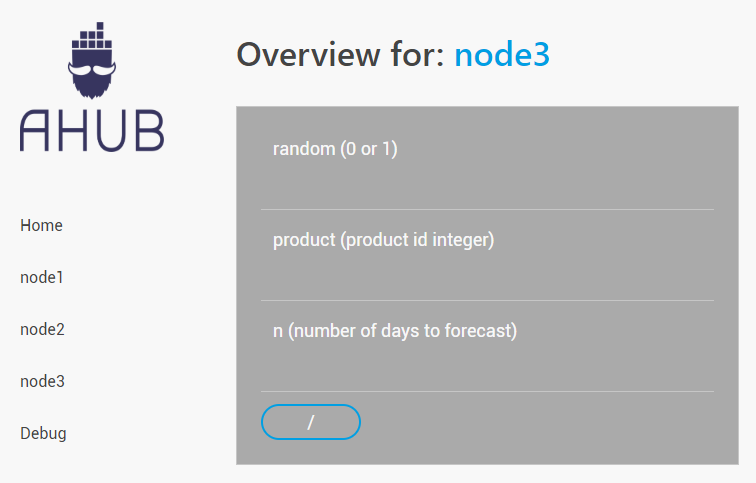 Finally if you want to tear down the whole stack, you can do so with the following command

We were able to ramp up a set of analytical containers providing RESTful APIs by just changing a few lines in a Docker compose file. The AHUB deployment framework takes care of common tasks like encryption, authentication and a graphical user interface to the endpoints. In the next installment of this tutorial series, I will show how to run a stack on a cloud-based virtual machine with public DNS address and retrieve a proper SSL certificate from Let‘s Encrypt.

I am still looking for contributors to the AHUB project, especially a frontend developer. So if you are keen on ReactJS, give me a shout.